My name is Latisha Doty and I am from Cordova, Tennessee. I have a wonderful husband Ricco to whom I have been married
for 16 years. Our journey through life has been quite the adventure to say the least.

Two years after we were married, I was not feeling well and went to the hospital. They sent me home with what they thought was a kidney stone. I felt worse and went back only to be told I was minutes from dying from a pulmonary embolism (blood clot in the lung). I recovered, but soon after, at a routine check up, I was diagnosed with Hodgin’s Lymphoma. I needed surgery followed by chemotherapy and radiation.

A few months after I was back on my feet. I started suffering migraines and was diagnosed with a benign brain tumor. Another surgery and I finally was fully recovered. Just when I was back to work, Ricco was diagnosed with renal failure. He went through home dialysis while waiting for a donor match. He received a kidney from a little girl and we keep in contact with the family.

A few years passed and we wanted to start a family…finally. Knowing my past history, I went to a fertility specialist. However, at that time I weighed 363 pounds. I begged to try at least one IUI which we did, but it was not successful. The doctor told us we would need ivf. When he handed me the cost sheet, I sat there crying. There was no way we could afford it. In addition, the doctor told me I needed to lose a significant amount of weight before even attempting IVF. That evening I went home and prayed and decided I needed to change my life.

Ricco and I hired a personal trainer and a nutritionist. I became addicted to the gym instead of food. I was losing weight gradually and in a healthy way. After a time, I applied to Baby Quest. Amazingly, we were selected as grant recipients. Although I was working hard at losing weight (over 100 pounds), my doctor said it was not enough so I needed to postpone ivf until by BMI was under 40. I was so angry, although I knew he was right. Months went by and I finally reached a BMI of 36. It was now time to begin!

At my first ultrasound, they discovered fluid in my uterus. Another roadblock! I felt my dream of a child would never happen. I underwent an outpatient procedure and was told I needed to wait a month to ensure the fluid had not returned. Then came Thanksgiving and Christmas holidays and my body was just not ready even though my spirit was. I didn’t even so much as sniff pumpkin or sweet potato pie for the holidays.

January came and I was finally ready to start my meds. Because of my previous health issues, I had to add blood thinners to my injection list. I had no problems with this because, at this point, I was willing to do any and everything to finally become a mother. On retrieval day we ended up with 7 follicles. Considering my past issues, that number was huge. Before transfer day, we were down to 4.

On the morning of transfer day, we were told that two embryos had not survived and the two remaining were not the best quality. I cried and cried because I had gone through all of this and only had two “fair” embryos.

Ricco and I prayed knowing we had done everything in our power to become parents. Now was the wait to see if either embryo would stick. I took a week off from work and watched nothing but comedies on Netflix and drank fertility smoothies. I walked in for my beta nervous because we had no embryos left.

That afternoon, I received the call telling me I was pregnant!!! I dropped to my knees. All the waiting, the eating healthy, the working out, the blood work, the outpatient procedures, the sticking myself with blood thinners, the blood clots, the cancer, the brain tumor, the tears. It had all prepared me for the greatest gift of all – the joy of my beautiful baby girl.

Because of everything we had gone through, we were finally free from the health issues we had endured so we named our daughter, Freedom! Her middle name is Ann after the little girl who lost her life and whose kidney Ricco received. I tell my story for anyone who is thinking about giving up.

DO NOT GIVE UP!  Be as healthy as you can be to improve your chances of conception. The end of the journey is far greater than any you could ever imagine. 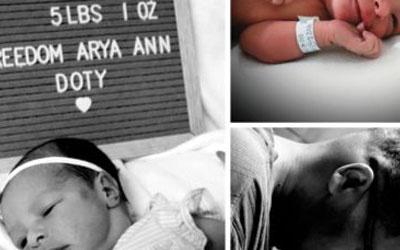