My husband, Antonio, and I first met in Boston in 2007 while pursuing Bachelor degrees in music. I had grown up in Seattle and Antonio’s family was in Massachusetts. However, after knowing each other for four years, we decided to take a leap of faith together to complete our Master degrees in Los Angeles. Although we didn’t have family in the area, we fell in love with the city and arts community and decided it was where we wanted to build a family. We married in 2014 and started trying to conceive about a year later.

Infertility was never something that had crossed our minds. We both came from big families and felt like we made it a priority to be careful in choosing when to start a family. Although we both knew we wanted kids, it was important to us to have strengthened our relationship, completed our education, and established some form of financial stability prior to growing a family. We had been together for four years and assumed this “last step” would be the easy part.

For the first year after going off birth control, my cycles were very irregular. Within six months, we were concerned there may be something wrong and began working with a fertility specialist. We naturally assumed that I was struggling with some form of infertility so we were slow to complete the male testing in an attempt to save money. After about a year, my cycles began to normalize and we discovered Antonio had a low sperm count. Despite several tests and lab work, there was no explanation. We were told that our best chances were for Antonio to do a sperm extraction surgery (micro TESE) paired with IVF.

Up until this point, our testing was partially covered by insurance but now we were panicked  because these two procedures are very expensive and were not covered. It appeared that our chance of conceiving a child would be delayed for several years. In addition to the financial strain, infertility felt extremely isolating. We not only hid this part of our lives from those closest to us but also struggled to communicate our fears and concerns between the two of us.

Through research, we came across the Baby Quest Foundation. We anxiously awaited the few months prior to the next grant cycle to submit our application. Receiving the news that we were selected as December 2017 recipients felt like a breath of fresh air. It gave us both a sense of hope and helped us realize just how much we had been holding back from each other.

Male factor infertility is an even more isolating issue than female infertility can feel like. Throughout the few months we discovered what was prohibiting us from conceiving, we were aware of the possibility that the TESE would be unsuccessful. The uncertainty itself was an added stress but we did our best to focus on what it really meant to build a family.

In May 2018, as Antonio woke up from a four hour long procedure under anesthesia, we were told that the doctors were unable to find any sperm and that he had always lacked the cells to be able to produce any. While this news felt devastating in many ways, we had spent months preparing for this possibility. Our primary focus became the fact that he would be there throughout the stages of pregnancy and from the moment of birth. Making this choice alone was already more than countless fathers are able to commit to.

In February 2019, we welcomed not one, but two, amazing girls into our lives. Antonio was present at every one of their prenatal appointments and looks at and cares for our daughters like any incredible father would. I can never pretend to understand how it feels to not share DNA with my children. However, I will always value having a husband that has, in just a few months, already been more present in our daughters’ lives than any blood male relative that I have ever witnessed.

In order to work through male infertility, our definition of what it meant to be a father had to shift. We had always assumed that shared DNA was the easiest and most expected part of fatherhood. There are so many more responsibilities and commitments that expand far beyond genetics and the most critical is that they all involve a choice. Without Antonio’s decision to actively participate as the incredible father he has already proven to be, there would be so much missing from what we now consider the most crucial aspects of fatherhood.

Baby Quest not only provided us with financial support but also opened us up to the world of infertility and a community of support. We are grateful every day because, without the foundation, we would still be working towards starting a family. 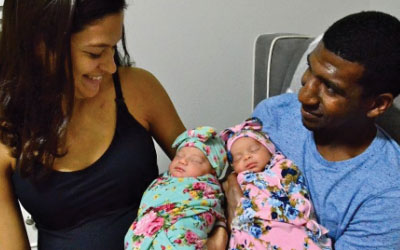